Stocks hit record again. But is Trump the reason?

Stocks hit record again. But is Trump the reason?

Investors are overwhelmed by the excitement and they clearly believe that both the big blue chip multinationals and the small businesses that do most of their business in the United States will continue to thrive.

So is it the Donald Trump rally? Or the Janet Yellen rally?

Some strategists believe that Trump’s stimulus packages and talk of killing many burdensome regulations are the reasons for the surge in stocks.

Or maybe it is best described as a continuation of the Barack Obama rally?

You could say that the POTUS 44 gave a very good hand to the POTUS 45. 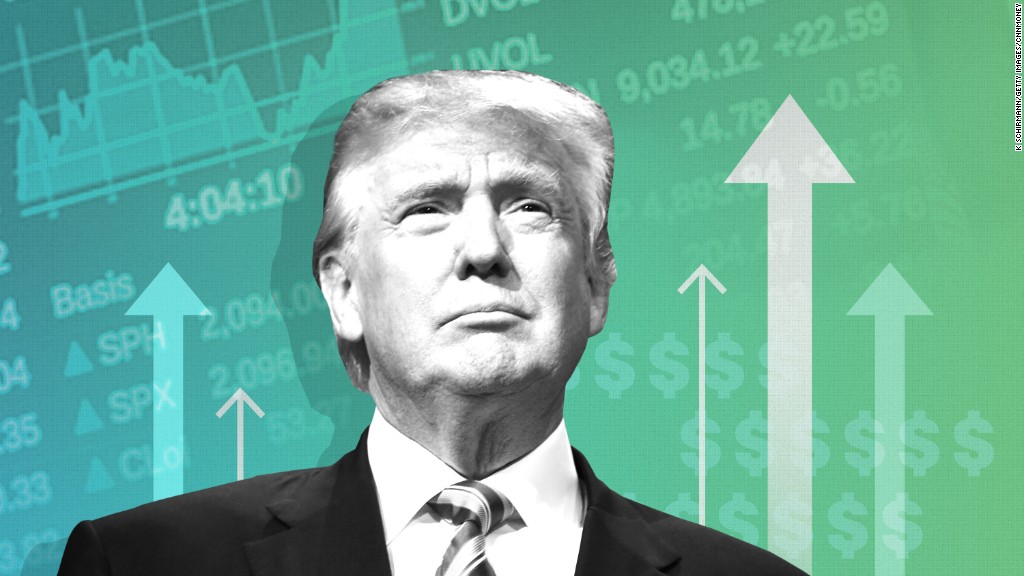 The Dow, S&P 500, Nasdaq and Russell 2000 each reached new historic highs on Monday.

The strong job market and the global economy that Trump inherited may be the reason consumers and businesses are so confident.

But investors (and financial journalists) often give the president more credit – and blame – than they probably deserve for stock market performance.

RBC strategist Jonathan Golub underscored it in a report on Monday entitled “Message to the Market: It’s Not All About Donald”.

Golub noted that the S&P 500 had increased by almost 7% between the end of June and election day – a time when most polls predicted that Hillary Clinton would be the next president.

But stocks have continued to climb since then, increasing 8% since Trump withdrew (at least from mainstream media and Wall Street).

You cannot play on both tables. It makes no logical sense to suggest that stocks rallied because investors thought Trump would lose and continued to rally because Trump did not lose.

Bond yields have also risen since Trump’s victory, a phenomenon many investors have attributed to the likelihood of the President and the Republican Congress being raised.

However, Golub points out that the yield on the 10-year US Treasury also increased at the end of the summer.

Of course, many investors were also looking for incentives from Clinton.

Again, many investors argue that Trump is the catalyst for something that not only happened before he was elected, but that happened because many thought he would lose.

So it’s strange that Trump is cited as the main reason for a market rally that started months before anyone thought he could win.

What’s really going on? The only constant in recent months has been the Federal Reserve.

Yes. markets react to Washington. But they are paying more attention to Janet Yellen, not the White House.

Before the election, the Fed made it clear that it would likely raise interest rates in December and do so a few more times in 2017, regardless of who won the presidential race.

The good news for investors is that the U.S. economy appears to be growing steadily, but does not appear to be in danger of overheating.

The latest employment report showed that wages have increased at a decent rate of 2.5% per year. But the figure is not high enough to raise fears of runaway inflation and lead the Fed to aggressively raise rates.

Even if Yellen and the Fed raise rates three times this year, they should only do so at a quarter-point each time. This would push the Fed’s short-term policy rate in the range of 1.25% to 1.5%.

It is still extremely low. At these levels, stocks would always be more attractive than bonds. Corporate profits should be able to continue growing at a healthy pace. And consumers would likely continue to spend.

So investors would be wise to keep a close eye on Yellen and not just focus on the nearsighted president,

With this in mind, Yellen is expected to testify before Congress on Tuesday and Wednesday. And what she says about the timing and magnitude of future rate hikes could end up keeping the rally at full speed – or stopping it.